In honor of it’s return to ABC Family on Monday, now seems like a good time to talk about The Fosters, the drama about “a multi-ethnic family mix of foster, adopted, and biological kids being raised by two moms.” 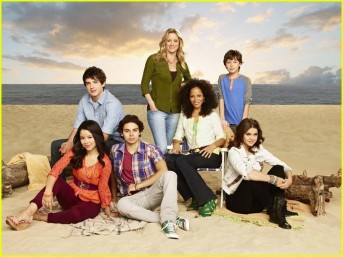 Upon the initial airing of the pilot over the summer, Mike Hale, a critic at the New York Times, decided the diversity of the show was nothing more than “demographic engineering” “so obvious that […] even the characters notice it.” But, Hale’s hasty conclusions about The Fosters, which represents at least two communities of which Hale does not belong to as a straight man, are just plain wrong.

Based just on lesbian parents, Stef (Terri Polo) and Lena (Sherri Saum), and their multi-faceted identities, The Fosters is obviously not just about diversity for show, but does a bang up job representing the lives of women, the LGBT community, and people of color.

The Fosters creates stories that poins out Stef and Lena’s specific struggles around their identities as women, lesbians or Lena’s race, but also as working parents, partners, friends and family. By doing this, Stef and Lena are three-dimensional characters identifiable to a wide range of viewers. The Fosters avoids damaging stereotypes at nearly every turn, thus breaking down misconceptions about the LGBT community.

For example, Stef struggles with her homophobic father.

Here, the show has addressed homophobia in a realistic, compelling manner, authentic to Stef’s identity as a lesbian. The struggle for acceptance is something that most LGBT people will face at one point or another. It is not; however, the only issue LGBT people face in their lifetime, but one piece of an intricate tapestry of experience. That is exactly how The Fosters portrays it—no room for preaching here. The point is not belabored, and Stef owns her identity—disinviting her father to the wedding—reaffirming that there is nothing wrong with her sexual orientation.

This conversation between Lena and her mother, Dana (Lorraine Toussaint) highlights both the racism experienced by people of color outside and within their own communities, and the complications of expressing one’s racial identity. It’s more impactful that this conversation happens between Lena and Dana, because black women are even less visible in society than black men.

There is a lot of discourse packed into this conversation between Lena and Dana about race, highlighting some important issues about race, but does not pretend to offer any sort of solution, because a solution does not exist yet. To present some, quick, after-school-special type lesson here would cheapen both complex social issues and Lena and Dana’s characters. Lena walks away, leaving the conversation hanging in the air, initiating important discussions about race among viewers.

But, Stef and Lena are more than their sexual orientation or race, and Stef and Lena spend more time just living their lives as working parents, partners, friends, family and three-dimensional people. For example:

This struggle of balance between partners, work and children is common for parents of any combination of genders. By including that same-sex partners have an active love life without it being sensationalized, The Fosters represent Stef and Lena as comparable to any other couple. They are shown being physically affectionate with each other, as any married couple would be.

Stef and Lena are humanized in other ways as well. Lena worries about Stef getting injured in her work as a police officer. They disagree about how to discipline their kids. Stef and Lena also have a social life outside of their family, inviting friends over for dinners or parties and going out to events with straight and other lesbian couples. These are just regular people who happen to be diverse in some aspect of their identity.

The Fosters represents diverse communities with gravitas, and makes these characters into complex people that nearly everyone can identify with on some level. As Manisha Aggarwal-Schifellite eloquently states,“On The Fosters, every character is nuanced in their relationship to the world, and their stories are clearly shaped by their personal experiences and identity markers.”

The real life diversity of The Fosters’ creative team may have something to do with their success in creating relatable, complex and diverse characters. Show runner, Johanna Johnson, is an out lesbian wife and mother with adopted children. Peter Paige and Bradley Bredeweg join her as openly gay executive producers. Executive producer, Jennifer Lopez, lived with her lesbian aunt and cited this as her inspiration for getting involved with The Fosters.

When asked in an interview if the diversity of the creative staff was necessary for diversity on the screen, Bredeweg confirmed, “Yeah, I think so,” and Paige added, “we would be remiss to not give people real, true, personal, interesting stories and translate those for the screen.”

Corroborated by the largely positive reception by the queer female population, as evidenced over at AfterEllen, and positive criticism by African-American women, The Fosters transcends Hale’s accusations that the unusually diverse cast of characters is only for show. The Fosters makes an important, positive and compelling contribution to the representation of marginalized communities through complex, relatable characters like Stef and Lena.

Bring on the second half of Season 1 on ABC Family January 13 at 9/8C!