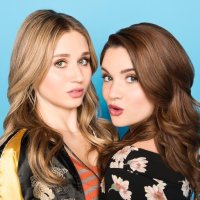 Faking It. From such tentative potential after what sounded horrible, the season finale could not possibly have ended any worse. In those final seconds–with Amy (Rita Volk) and Liam’s (Gregg Sulkin) hook up–it really became a lesbian’s worst nightmare.

Covington states in a recent interview that his heart is in the right place and he comes from the same community. First, good intentions can still result in terrible actions. Secondly, he doesn’t come from the same community, as he so vividly demonstrated with Faking It’s season finale. Queer women are exploited by men–straight and apparently gay showrunners–by using these tired lesbian sleeps with man tropes, queer baiting and double standards.

Very few gay males experiment with straight women once they come out or even as part of the coming out narrative. But yet, the journey for women always seems to involve a man. It’s a double standard reproduced time and time again. There are few out and proud, unquestionably lesbian characters in the same way Shane (Michael J. Willett) is an out gay man. Case and point, Faking It, in which showrunner Carter Covington drug an incredibly vulnerable audience through a storyline about Amy realizing she has feelings for her best friend (and other women) only to end in bed with Liam of the “out to turn girls straight” variety.

As Trish Bendix states in her guest column for Hollywood Reporter, “It’s also sexist and hypocritical as writers would never put a gay male character like Faking It’s Shane (Michael J. Willett) in a similar situation. Because men do not question their sexuality, apparently. Only confused women do, and that is not only harmful to television lesbians, but the real-life women who are told “they haven’t met the right man yet” or “won’t know until they’ve tried it.” Legitimacy is called into question, and that makes being an out woman dangerous, especially in parts of the world where corrective rape of lesbians is an acceptable practice.”

Faking It is just reproducing a long line of tropes that are unoriginal, exhausting and downright dangerous. We live in a world where men feel entitled to women, where men feel it their duty and right to correct queer women. Amy and Liam’s hook up may be a human experience, of hurt or longing or continued self discovery or whatever other excuse, but the repercussions of that choice extend beyond just the broken hearts of fan girls. There is nothing revolutionary about that final moment–it’s just terrible. The end point of what now is obviously an entire season of queer baiting.

Covington told people to trust him, even after this finale, with no reason to. Ryan Murphy made it hard for queer women to trust gay male showrunners who continue to show an extreme ineptitude in handling their queer female characters. Covington continues the tradition, just sugar coating his interviews and allowing the show to slam its viewers on his behalf. Putting the girl who just basically came out to her best friend immediately in bed with a man–as what? A cliffhanger?

Even AfterEllen, Viacom-owned (same company that owns MTV, btw), over the top Faking It fan girls turned professional recappers finally say about this, “And the decision to have Amy sleep with Liam felt like a gut punch for the sake of being a gut punch. And worse, it’s a gut punch to the people who loved this show the most, who got it renewed, and who could use a break from the same tired old tropes. Part of the problem is just timing; placing it at a season finale and leaving us to stew in agony is shoddy storytelling. It doesn’t really count as a cliffhanger if you blow up the cliff.”

Faking It’s finale is cruel, unnecessary and not even Ryan Murphy had Santana hook up with a dude once she acknowledged she loved her best friend. Someone send Carter Covington a yellow hat.