This introduction preceded the first installment of expunging this old Klaine research from my archives, but here it is again: To be frank, Glee has exhausted its welcome in my head space. In trying to be a healthy person after a bad relationship, I tabled finishing two posts about Klaine almost a year ago. Some of the references are out of date and I have no desire to spend any more time thinking about Klaine and the insipid behavior of Klainers (read: no, not all Klainers). But when tweets showing Klainers complaining about Brittana came across my Tumblr dash, along with comments borrowing text from our Brittana post, I realized outdated or not, things haven’t really changed at all.

So here it is, the Klaine post, down and dirty. This is the second, more practical installment, which points out some obvious fact checking errors the Klainers may have (inadvertently?) made.

One of my biggest pet peeves about the Glee fandom at times is the misinformation used to create what they think are logical arguments. Klainers especially have this idea that Klaine is all that drives the show. This is most definitely false, both in terms of the fandom and general audiences. They are not alone in the assumption that their ship runs the show (fans of many larger ships do this), but Klainers seem to be most vehement in their misinformation. So, we’ll start by debunking Klaine’s popularity with a dose of reality. 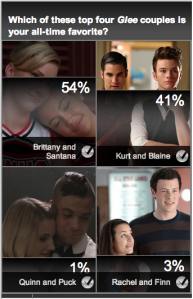 First of all, Klaine is not the most popular couple on Glee. Actually, there is no way to tell which couple is, there’s so many of them. Klainers like to point to shipper polls where Klaine has won as the best couple. What they fail to see is that for nearly every poll Klaine has won, another Glee couple has won one as well. For example, Brittana won a recent People’s Choice online couple poll, Brittana beat out Klaine to make in into the final round of an EOnline couple poll in early 2013, Faberry won an Eonline poll circa 2012, and on and on.

Not to mention, Klaine did not win best couple at the actual People’s Choice Awards this past year. In short, the lesson here is that online polls where fans are asked to choose something has no real correlation to the actual popularity of a ship. If a poll is the best evidence of a couple’s popularity, then get off the bus now, because these polls hardly reflect any real data. They more accurately represent who has the most spare time to vote many, many times online.

Klaine also makes this pompus statement that “Klaine is the only thing the media talks about.”

One such Klainer claim starts, “featured on magazine covers.” Yes, Klaine were featured on a magazine cover—Entertainment Weekly in January 2011. For those not keeping track, that’s more than 3 years ago.  A quick search will also reveal that covers featuring Darren Criss, as Klainers care more about Blaine than Kurt, are mostly from 2011, and a few from 2012.  Chris Colfer, an out gay man in real life, has a few magazine covers that are more recent. Perhaps my cursory Google search is wring, but I don’t see any other featuring Criss and Colfer together.

As for the rest of the media loving Klaine. I’m not sure what Klainers read, but their claim couldn’t be farther from the truth. In actuality, most media sources are fairly neutral on their opinions about couples. This is for two reasons; first, general audiences don’t care or even know about ships the same way fandom does, and often times the journalist isn’t tapped into fandom in the same way fandom is. Second, it’s easier to avoid backlash by staying neutral about fan-favorite couples. (Or drive up your stats by writing inflammatory shipper articles on purpose, which is pretty lame.)

If Klainers constantly read sources that say what they want to hear, perhaps they have a point. But the media that matters is what everybody, especially people outside the small, contained world of online fandom reads, not the smaller niche publications written by fans for fans.

Here’s what some of these more general audience-focused media outlets had to report about Klaine:

All of the above media sources are mainstream and well read by a more general audience. They best reflect the thoughts of general audiences—an audience way more neutral towards ships—and  all of these indicate that Klaine isn’t drastically missed when not in an episode, or perhaps other pairings for Kurt are more appealing. Not to mention, Klaine clearly is not the center of the Glee universe, no single ship is. As a matter of fact, all of Glee’s fandom audiences combined are way smaller than the general audience. Welcome to the real world of Glee media coverage.

And finally, Klainers like to talk about ratings. The ratings don’t reflect anything better just because Klaine is featured. Here are some facts:

Ratings for 5×1 opened with a 2 rating and 5 million viewers, which is less viewers than the season 4 premier or season 4 finale, where Klaine’s engagement was supposedly a cliffhanger. The ratings between seasons would suggest Klaine just isn’t that engaging, since less people didn’t care enough to tune in the next season and see what happened with Klaine.

Ratings started to decline further around “Movin’ Out”, which was very Blaine, Klaine and Blam centered. Those ratings have never recovered. After a small blip in interest around Glee’s 100th episode, the ratings for “New New York” are incredibly telling. While it’s normal to lose some viewers over the first half hour of the show, during the first half hour of “New New York”, the ratings plummeted by nearly a half a million viewers. If we review, this is another episode centered around Blaine, Klaine and Sam, and the significant drop in audience suggests again that not only will Klaine not rescue the ratings, but these characters are actually a literal turn off to both a large portion of the fandom and general audience.

Overall, Glee’s ratings continue to plummet. No amount of Klaine will save that. Furthermore, there is evidence that can be skewed to read that Klaine negatively affects the ratings. During the 100th episode, which featured a Brittana story line and kiss, the ratings experienced a mild increase over previous episodes. Klainers complained about the lack of Klaine scenes, and in the 101th episode, during which Klaine got their make out scene, the ratings decreased from the 100th episode the week before. Klaine does not equal ratings.

So there we have it. Klaine is not as important as their fan girls want them to be. Klaine does not drive ratings. Klaine is not a huge deal to the mdia. Klaine and the Klainers are only one part of the Glee fandom, and certainly not the most coveted (because no singular ship is)—not critically and definitely not in terms of LGBT representation.